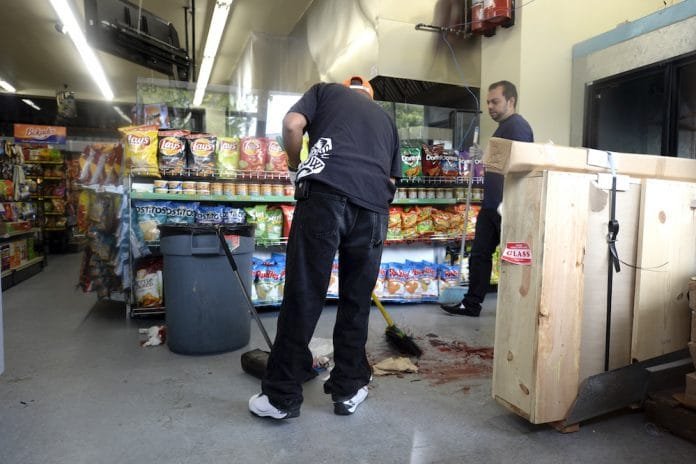 Take the case of Joanna Czarnecka and her husband, Allen Fernandes. She was born in Poland; he in India. Both of them are documented immigrants, and their two young kids were born in the United States.

The Fernandeses have a catering and event planning business. Before the pandemic, they had a couple of workers who helped them at large weddings and corporate events that could accommodate up to 300 attendees.

“When the pandemic hit, all the events were cancelled and none were scheduled,” said Czarnecka-Fernandes, of East Windsor, NJ.

The couple then found themselves among the more than 7 million people in the country who lost their jobs due to the pandemic. But thanks to the federal stimulus aid, including child care assistance for their kids and monthly unemployment benefits, the Fernandeses were able to make ends meet.

For more than six months last year, they were able to financially rely on government aid.

“The government was quite generous, I must say. It was of great help during the worst time when we could not run our business,” Czarnecka-Fernandes said. “The school also offered free books and food for the kids. We felt we were not left alone.”

In December 2020, because of the government support that they had received, the Fernandeses were able to restart their business operations.

“We started slowly, holding events for 30 people,” said Czarnecka-Fernandes. “Now we are back in almost full swing, booking events for 2022.”

When federal aid is out of reach

But for Polish undocumented immigrants, the situation remains dire.

Krzysztof P. immigrated from Poland. For 17 years that he has been living in the United States, however, he has unsuccessfully legalized his immigration status.

An essential worker, Krzysztof works at a Polish deli in central New Jersey. He has been busy since the pandemic hit, like many other workers at food stores, production plants and delivery services.

“All day, [at the peak of the pandemic,] I packed bags to bring them outside for customers who had placed their orders on the phone,” said Krzysztof, of Linden, NJ. “We had so many orders that we could not even catch up with filling up the shelves.”

When many of his coworkers decided to leave work because of the spreading coronavirus, the store suffered from staff shortages.

“I had no day-off last year. I also didn’t have much choice not to go to work every day. If I didn’t, I wouldn’t have any income to pay rent and other bills,” he said.

In addition, Krzysztof said that he doesn’t have health insurance. So when he contracted COVID-19 earlier this year, he had to cover his own medical expenses, including COVID testing and prescription medication for pneumonia.

Although he has been paying taxes for years, he is not eligible for federal or state benefits because of his immigration status.

“The pandemic has laid bare many issues of inequality in our country, most particularly among immigrants,” Muzaffar Chishti, senior fellow and director of Migration Policy Institute (MPI) office at NYU School of Law, said at a recent briefing with ethnic press organized by the Center for Cooperative Media.

A disproportionate number of essential immigrant workers, both documented and undocumented, have been feeling the economic hardship, Chisti said.

“We found that 6 million immigrant workers actually worked in the food service and hospitality industries. These were two major occupations that were hit the hardest when the economic downturn happened,” he added.

Chisti estimated that 200,000 of these service and hospitality workers are from New Jersey.

In 2020, MPI research showed that about 14.4 million immigrants in the U.S. were excluded from federal and state government aid.

The situation improved in December 2020, when Congress made significant changes in the stimulus bill, making some 3 million tax-paying immigrants, including about 90,000 in New Jersey, eligible for the coronavirus stimulus benefits.

“Still, about 11.2 million people remain ineligible, even though they are working and filing tax returns,” Chishti added.

Nedia Morsy, lead organizer from Make the Road New Jersey, noted that COVID-19 has impacted everybody, regardless of immigration status.

Morsy noted that her organization provides assistance to immigrants in the state, including nearly 500,000 undocumented immigrants.

“We have the fourth largest population of undocumented people in the entire country. They pay about $600 million in state taxes and about $1 billion a year in federal taxes,” she added. “Over the last 10 years, undocumented immigrants have paid $1.2 billion into to the state unemployment fund, but they haven’t received one penny of that.”

After 18 months of lobbying, including a hunger strike by members of Make the Road New Jersey, NJ Gov. Phil Murphy allocated $40 million for excluded immigrant workers.

Through the New Jersey Excluded Workers Fund (NJEWF) program, if adopted, undocumented immigrant families—who have been previously excluded from federal aid and are in need of financial assistance—will be able to receive up to $2,000.

“Obviously, it is a drop in a hat of what is actually needed. The $40 million will help roughly 10 percent of all New Jersey undocumented excluded workers, so it is still not enough,” Morsy said.

Beside Gov. Murphy’s financial aid program, which hasn’t been implemented yet, grants from NJ Relief Fund will also be available through community organizations. But Morsy said that this cash assistance for undocumented immigrants is incredibly limited.

“That’s why we need to continue pressuring our legislators to put more money into the fund,” she said.

“I thought that once Donald Trump is out of the office, things will change and immigration reform will happen. But now it seems that the Democrats won’t be able to do anything,” said Krzysztof.

Last month, the Senate parliamentarian rejected Democrats’ proposal to include a pathway to legal status for more than 11 million undocumented immigrants in their social spending plan..

“This is a very, very generous provision. If this bill goes through, it will not only cover people for legalization but it will also clear a huge amount of backlog in the categories of people waiting for a green card. That includes a large number of people,” Chishti said.