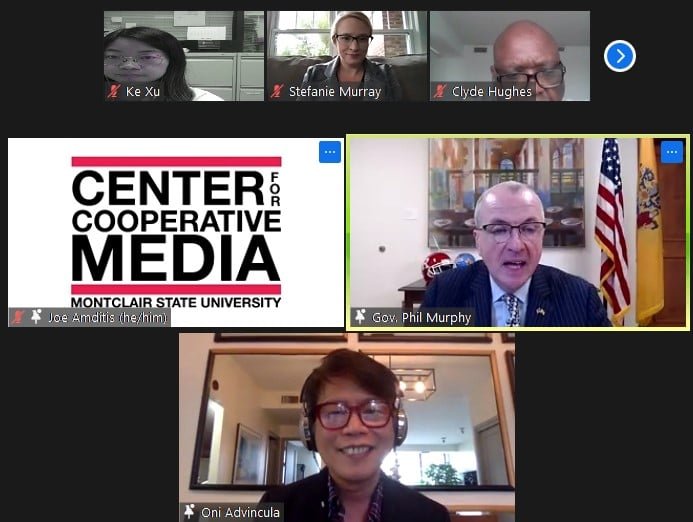 As COVID takes toll on mental health of NJ Chinese immigrants, Gov. Murphy vows to get the help they need

NORTH BRUNSWICK, NJ — Governor Phil Murphy acknowledged that immigrants and people of color communities in New Jersey are suffering from an increased rate of mental health concerns, including anxiety and depression, amid the coronavirus crisis.

“Mental strains are felt the most at a very high level due to the pandemic, and are overwhelmingly [prevalent] in communities of color and immigrant communities,” Murphy said during a virtual news conference with ethnic media in New Jersey, organized by the Center for Cooperative Media at Montclair State University earlier this month.

Murphy admitted that the increased incidence of psychological difficulties in ethnic communities in the state is related to the lack of access to appropriate, timely and culturally responsive mental health information.

“We ought to be thinking even more broadly about getting that [mental health] information [and resources] to communities where we know that they are suffering,” the governor said.

Maggie Luo, associate director of Development and Communications and coordinator for Chinese American Mental Health Outreach Program (CAMHOP) at the National Alliance on Mental Illness (NAMI) New Jersey, has seen increasing requests for help from Chinese parents and students in various school districts during the pandemic.

“When some of the families reached out to us, most of the time the patients were already in the hospital,” Luo said. “There are a lot of changes in schooling during the pandemic, and many families are not prepared for it.”

In some [Chinese] families, she pointed out that kids are facing social-emotional challenges because the pandemic has dismantled their routines, including normal school days.

Other parents, Luo added, may also have their own issues, including financial pressure due to loss of income.

“When they are all under stress and have to spend a whole day together under the same roof, it’s easy to have conflicts and arguments,” said Luo.

But what makes the situation worse for many Asian  families is the anti-Asian sentiment during the pandemic. Luo noted that CAMHOP has hosted many peer support group events, talking about hate crimes against Asians.

“Many attendees said they have a great fear of going out, and some of them even considered buying self-defense weapons,” she said.

For the Chinese community, stigmatizing mental health issues is the biggest barrier for them to seek help.

“Language is another issue,” Luo added.

For families that only speak Chinese at home in New Jersey, according to the Migration Policy Institute, only 59 percent said they speak English “very well,” and 41 percent of them speak English less than “very well.

As the disproportionate impact of COVID-19 on people of color communities has resulted in deep grief and trauma, New Jersey’s largest in-patient psychiatric program at Bergen New Bridge Medical Center has gone through its busiest time in more than a decade. A significant number of its patients are people of color, especially children.

“I applaud how the state government responded to the mental health crisis,” Luo said, adding that “The NJ Hope and Healing program definitely gives us more resources and services we need.”

That [psychiatric] program, according to Tom Hester, chief of staff of the Division of Mental Health and Addiction Services at New Jersey Department of Health (NJDHS), relies on a neighbor-helping-neighbor approach and hires staff that are indigenous to the communities it serves.

“This is one of the hallmarks of the program, which addresses reducing barriers by employing those for the community and partnering with trusted community leaders, such as faith based organizations.relies on a neighbor helping neighbor approach and hires staff indigenous to the communities served,” he added.

“Using data, through this procurement process, the Department will develop and fund outreach services that would connect individuals to treatment,” said Hester.

However, many people of color families don’t know about the available services because of language barriers.

Luo said there is limited translated information, like the NJ Hope and Healing program.

“That’s why many families in the Chinese community rely on us or other community organizations to navigate the system,” she said. “We want people to know that ‘You are not alone. There is hope.’”

Luo hopes that the state can give community-based or language competent programs like CAMHOP more funding so that they can better serve the Chinese American and people of color communities in the state.

She also suggested that people, especially those who are not proficient in English, can always use their right to use language services provided and funded by the state.

Still, Gov. Murphy assured that his administration will continue to address the growing mental health concerns in the state’s ethnic communities.

“Our administration understands that New Jersey’s diversity is our greatest strength. We have a lot of programs, we do a bunch of them on our own, and we partner on others,” said Murphy. “And it’s exactly the timing; it could not be more important than right now. But I’ll make sure we get that information [on mental health] out to everybody.”